Load Building Software Optimization – the Heart of Our Operations

A study of legally loaded trucks passing weigh–in-motion scales revealed that 92% were not even close to being full. At the same time, another study claims that 20% from all trucks were overloaded.

AutoO2 vs. Other Load Builders

AutoO2 takes requirements (for example, what is shipping from a plant to a warehouse). It automatically turns this demand into efficient, low-cost truckloads that use almost every last pound or cube of capacity. Loads are legal, damage-free, and maxed out. 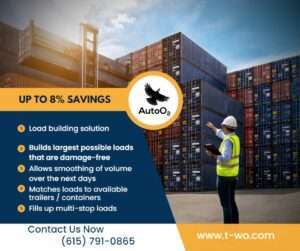 Large CPG manufacturer that “cubes out” its shipments.

The manufacturer ships on slip sheets or as bundles, so loads can be created that allow more floor positions to be occupied than if the load was palletized. So, for example, if there are several stacks with foot prints of 1.02 meter x1.2 meter, loaded with the wide dimension across the trailer, the load, in a 16-meter trailer, would allow only 15 rows with 0.7 of a meter wasted at the back. If, however, the stacks were 1.0 x 1.2, the load would allow 16 rows and zero waste. Unfortunately, products come with varying sizes of footprint.

Planners used SAP TLB to create loads. After the loads were created, another tool tried to add more weight.

Load building optimization AutoO2 automatically created the right combination of footprints to minimize the total wasted space at the back of each trailer for all the trailers on the lane. While the results are a 0.9% reduction in total loads, this was a significant result for the client.

Will AutoO2 Load Optimization Save Your Company Money?

Yes, from 4% to 8% of your total transportation costs.